At the heart of Fareast Asia lies Bulacan—a province in the Republic of the Philippines, situated in the country's Central Luzon Region, north of Manila, the nation's capital.

Bulacan prides itself for its rich historical heritage. In 1899, the historic Barasoain Church in Malolos City (Bulacan's capital city) is the birthplace of the First Constitutional Democracy in Asia.

Bulacan is also the cradle of the nation's noble heroes, of great men and women; among them: Marcelo H. del Pilar—"The Great Propagandist," and General Gregorio del Pilar"—The Hero of Tirad Pass."

Bulacan is also home to many of the country's greatest artists, with a good number elevated as National Artists; among them: the legendary poet Francisco "Baltazar" Balagtas, the musician Nicanor Abelardo, and the nationalist sculptor Guillermo Tolentino.

Today, Bulacan is among the most progressive provinces in the Philippines. Its people - the Bulakeño (or Bulakenyo) - are highly educated, enterprising and industrious.

Bulacan has fast become an ideal tourist destination, owing to its vital role in Philippine history, and its rich heritage in culture and the arts. The province is popularly known for its historical sites; nostalgic old houses and churches; idyllic ecological attractions; religious attractions; colorful and enchanting festivals; swimming and various themed attractions; and a wide selection of elegant native crafts and sumptuous delicacies. It is also home to numerous resorts, hotels, restaurants, and other recreational facilities.

The Province of Bulacan, Philippines offers everything that you can ever hope for. An ideal and peaceful community. A committed government. A haven for business and investments. A perfect vacation getaway.

On the western tip of the Pacific lies the Republic of the Philippines. The country is bound by Taiwan on the north, Indonesia on the south, Thailand, Malaysia, and Singapore on the southwest, and Australia and New Zealand farther southeast.

The Philippines is strategically positioned at the crossroads of the Asia Pacific Region, serving as the gateway for European and American enterprises wanting to penetrate Asia.

The country is an archipelago that comprises 7,641 islands with a total land area of 300,439 square kilometers (116,000 squares miles) populated by 109,581,078 according to Population Census of 2020 by the PSA. The country's population is equivalent to 1.41% of the world's population according to the data of the United Nations. It ranks number 13 in the list of countries when it comes to population with a density of 368 per Km2 (952 people per mi2) comprising a total land area of 298,170 Km2 (115,124 sq. miles) in which 47.4 % of the population is urban. The median age in the Philippines is 25.7 years. It is a tropical country endowed with abundant natural resources.

The country's Gross Domestic Product (GDP) is 362.24 (in US billion dollars) as of 2020. It is expected to increase substantially to over 590.86 billion U.S. dollars by 2026. Crop production grew 3.3%, as palay and corn production increased by 8.6% and 6.5%, respectively. The value of agricultural production during the first 3 months of 2021 amounted to P484. 8 billion, 8.4% higher than the year-ago level. Fisheries production posted a flat growth rate of 0.6% during the period. The prospects of economic performances of the country continue to show positive improvements. Weighed down by the COVID-19 pandemic, the Philippine economy is forecast to grow at 4.7 percent this year before accelerating to 5.9 percent in 2022 and 6.0 percent in 2023. Local governments have played a crucial role at the front lines of the COVID crisis. A current lack of resources prevents local government units (LGUs) from fulfilling their devolved mandates.

The Province of Bulacan may very well be considered as one of the few provinces in the Philippines that greatly benefit from its geographic location. The province boasts of its strategic location, which is equidistant with the northern and southern parts of Luzon. At the same time, it is proximate and accessible to the National Capital Region (NCR) or Metro Manila where most of development impulses originate. Bulacan is one of the seven provinces comprising the Central Luzon Region. It is bounded by the provinces of Aurora and Quezon on the east, Nueva Ecija on the north, Pampanga on the west and Rizal on the southeast and Manila Bay on the southwest.

Dubbed as the "Northern Gateway from Manila," it is in Bulacan where the national trunkline road, Philippine-Japan Friendship Highway, forks in the Cagayan Valley Region in the northeast and towards the rest of North Luzon in the north and northwest. Such accessibility is a key factor that prompted private investors to develop several industrial estates in the province.

Bulacan has also become an important link between the large and consolidated consumer market in Manila and the resource-rich provinces of North Luzon. The province's strategic location is further highlighted in Central Luzon 's regional development as it is expected to play an important role in realizing the "W Growth strategy of the Medium Term Development Plan of the Region." 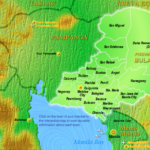 Bulacan has a total land area of 279,610 hectares according to the data released by the Land Management Bureau or roughly 15 percent of the total area of Central Luzon, the biggest Philippine island, and 0.9% of the country's total land area. The province has 21 municipalities, 3 component cities and 569 barangays. Malolos in the southwestern part is the capital of the province. Of the 21 municipalities and 3 component cities of the province, Doñxa Remedios Trinidad (DRT) is the biggest municipality covering 33.52% of the province's land area. This is followed by Norzagaray with 11.13 % of Bulacan's land area. Meanwhile, the municipality of Guiguinto is the smallest which is only 0.99 % of the province's land mass. The City of San Jose del Monte (CSJDM) has the most number of barangays at 59 followed by the City of Malolos with 51 barangays. Though DRT is the largest municipality in terms of land area, it has the least number of barangays with only 8. 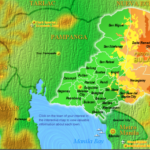 The province has a topography which is basically described by the flat western side and uplands on the eastern side. The upland on the eastern side gradually increases in altitude while nearing the base of the Sierra Madre which is a major mountain range in the Philippines found in the Cordillera. The western portion of Bulacan for instance has been classified in the Landscape Map as belonging to the lowland category with an approximate coverage of close to 50 percent of the provincial land area. On the other hand, the eastern part of the province covers those areas that are hilly to mountainous. This is where the province interfaces with the southeastern part of Luzon. In the middle of these two major landforms are the piedmont landscapes, which have elevation of about 50 to 100 meters above sea level. Over one half of Bulacan's overall land area have been classified as having slopes less than 8 percent or those considered as having level to gently sloping terrain and this is found on the western part of Bulacan.

With regard to its physical features, the province is divided into three areas known as the coastal areas of Bulakan, Hagonoy, City of Malolos, Paombong and Obando; lowland or central areas of Balagtas, Baliwag, Bocaue, Bustos, Calumpit, Guiguinto, Marilao, City of Meycauayan, Pandi, Plaridel, Pulilan, and Santa Maria; and lastly, the upland areas of Angat, DRT, Norzagaray, San Ildefonso, City of San Jose Del Monte, San Miguel and San Rafael. 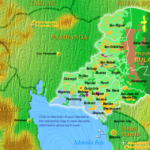 The land use of Bulacan is classified into two major types namely; Alienable and Disposable Lands and the Forest Lands. Alienable and Disposable (A&D) Lands refer to "lands of the public domain which have not been the subject of the present system of classification and declared as not needed for forest purposes" (Endriaga et. al. 2004). A&D Lands are further classified into Settlements or Built-up areas and Production Areas. On the other hand, Forest Lands are categorized into three which includes Protected Forest Land or the lands covered by the NIPAS Act, Non-NIPAS Protection Forests and the Production Forests.

The production land use deals with those areas used for settlements, forestry, agriculture, mining, quarrying areas, fishery, timber and other economic, agricultural and industrial activities. The protection land use, on the other hand, are those areas designed to be protected from human activities for purposes of protecting its unique physical and biological significance. Found in the protection areas are the preserved forests of the province which settlements are prohibited as much as possible.

Settlements development have been growing among the production areas basically because people prefer to live just within or nearby their production areas. Similarly, the built-up areas are growing faster among towns adjacent to Metro Manila. 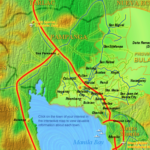 Bulacan is located about 27.5 kilometers from the financial and industrial center of Metro Manila. The access to and within Bulacan are made possible by a wide network of national and provincial roads complemented by municipal and barangay roads. Bulacan connects Manila to other parts of the Northern and Eastern provinces via the four major roads which are: the North Luzon Expressway (NLEx), Manila North Road (better known as Mc Arthur Highway), Daang Maharlika Road and the NCR-Bulacan-Boundary Bigte-Ipo-Dam Road. Aside from the four main highways that traverse the province, all roads are widely dispersed throughout Bulacan.

As suggested by the sectoral distribution of employment, tertiary or service sector is the chief driver of the local economy of Bulacan. The sector, which is made up of the wholesale and retail trade; transportation, storage, and communication; finance, insurance, and real estate; and community/ social and personal services, accounted for 62% of the total provincial employment.

The industry sector that includes economic activities dealing with manufacturing; mining and quarrying; construction; electricity, gas, and water generation followed the service sector with almost 26% share. Agriculture is considered as the weakest among the three (3) major sectors at almost 10% share, which deals with agriculture forestry and fishing.

The Province of Bulacan recorded the highest employment figure in the region for the period of five years. In 1995, Bulacan had 668,755 employed who were engaged in various income generating activities. As compared with the 1990 employment scenario, the province in 1995 grew by 41 percent also the highest percent increase among the six provinces of Central Luzon. Based on the National Statistics projection, by the year 2007, Bulacan will almost double its employment figure to 1,315,978 or an increase of 647,223.

In the 2nd quarter of 2002, there were 1,386,000 persons in the labor force of Bulacan, accounting for almost 27% of the total for Central Luzon. In the same period, Bulacan also had higher employment rates than the rest of the 6 provinces of the region. Bulacan's employment rate was 91.8 percent, which is 2.60 percent higher than that of the region and 2.00 percent higher than that of the country.

The industry sector consisting of manufacturing, construction, electricity, gas and water and mining constitutes 30% of the province's labor force. On the other hand, agriculture comprises 10 percent of the total employment in Bulacan.

The Province of Aurora recorded had the highest poverty incidence in 2018, was estimated at 11.5 and 10.6 percent. On the other hand, the Province of Pampanga had the lowest incidence with 1.9 percent followed by Bulacan ranked 2nd to the least poor. This is defined as the proportion of families whose income is below the poverty line to the total number of families.

Based on the estimates of PSA, the annual average income of a Bulakeño family was higher than the regional and national average by as much as 9% (against regional) to 21% (against national) in 2012. Among the seven provinces in Central Luzon, Bulacan ranked second with the highest income earner families with Php 283,216 next to Pampanga with an average annual income of Php 301,250.

The language used in the province is predominantly Tagalog. Most of the people in Bulacan can speak English. Other dialects used by the townfolks are Waray, Ilocano, Bicolano and Kapampangan.