8 Reasons for Investing in Bulacan

Bulacan is strategically located about 27.5 kilometers from the financial and industrial center of Metro Manila, lying in the southern part of Central Luzon. It is bounded by the Province of Nueva Ecija, Pampanga in the west and in the eastern side by Aurora.

Bulacan's most important resources are its people. Bulakenyo's tradition of meticulous craftsmanship and industry is world-renowned. The Province of Bulacan recorded the highest employment figure in the region for a period of five years.

Bulacan's agricultural area consists of 35.81% of the total land area while the grassland area consists of 22.6%. Its best use can be found in mixed farming diversified crops, irrigated rice paddy, and agro-forestry.

Access to and within Bulacan is made possible by an extensive network of national and provincial roads complemented by municipal and barangay roads.

The Provincial Government encourages economic growth by providing incentives and initiating policies that encourage more investments. It is creating the proper setting to hasten increased economic activities within its capability, such as through the institution of efficiency and effectiveness in government service, maintenance of peace and order, pollution control, and the provision of infrastructure and utilities.

6. Effective Partnership of Government and Private Sectors for Investments

The province created the Bulacan Investment Incentive Board and the Enterprise Development and Investment Promotion Division (EDIPD) in association with the Department of Trade and Industry, Central Luzon Investment Coordinating Council, the Bulacan Chamber of Commerce and Industry and TEAM Bulacan.

Bulacan is relatively a peaceful province. Order and discipline are the norms. The crime rate of 3.01 incidents per 100,000 population is much lower than the national average. 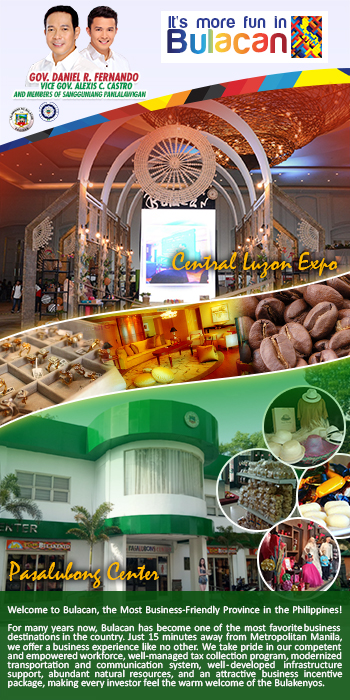